Domestic and international filing, registration, and
annual management of patents, utility models,
trademarks, and designs.
Prior art and information search prior to filing.

Trial for invalidation and confirmation of the scope of rights.
Infringement litigation, patent court lawsuits, and
supreme court appeals.

The utility model system is one for protecting and encouraging practical devices and promoting their use. To achieve this, the purpose thereof is to “grant utility model rights in exchange for publicizing technology”. Specifically, technology is accumulated and published technology is used through the publishing of inventions, and inventors are granted exclusive rights to thereby expedite commercialization and instill the desire to invent, ultimately contributing to commercial development. 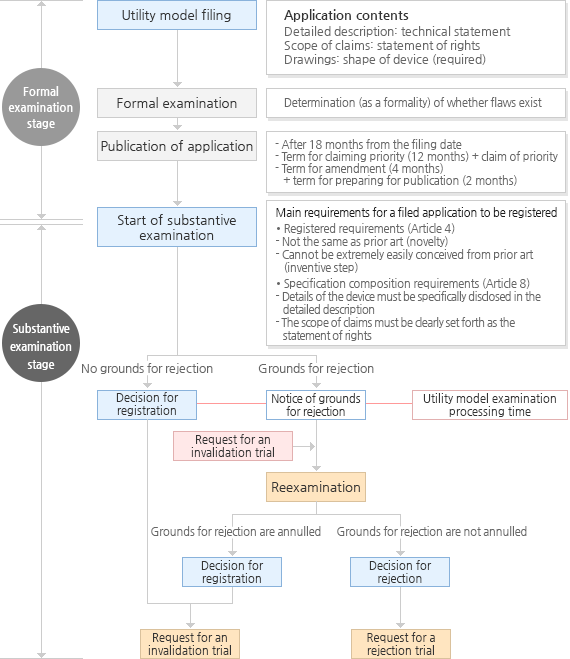 As a foreign word derived from the English word ‘design’, design is a term that is a broad concept encompassing product designs for products, visual designs such as advertisement posters, graphic designs, and digital designs, and environment designs for living spaces and environments.
Article 2(i) of the Design Protection Act prescribes that “a design means the shape, pattern, color of an article [a part of an article (with exceptions in Article 12) and script are included, the same in the below] or a combination thereof, which produces an aesthetic impression in the sense of sight.
Thus, according to the Design Protection Act, a design can be said to be a design for the outside of a corporeal article (or a part of said article) that can be the subject of an independent transaction. 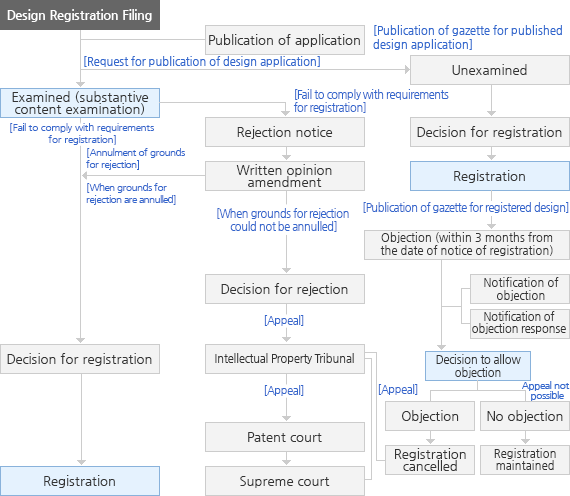 By allowing drawings that have been composed using 3D program files (3DS, DWG, DWF, and IGES) to be submitted, the inconvenience of having to compose drawings separately for filing has been alleviated.

The existing obligation to compose drawings through orthographic projection methods has been abolished, and the applicant can freely choose the composition method. Also, the number of drawings to be submitted is not limited, providing convenience to clients by allowing them to submit only the number of drawings they want to submit, as long as the overall shape and the essence of creative contents of a design are sufficiently represented instead of having to submit a perspective view and drawings for six faces.

Categories for unexamined articles are expanded

Categories for one set of articles are expanded

From 31 categories for one set of articles that could be filed in the past, the categories are expanded to 86 categories in total by adding specialized sportswear sets, etc., in order to better reflect the recent state of product transactions.

The concept of trademarks according to the Trademark Act

A trademark as a social fact denotes all sensuous expression means used to distinguish the products of different parties from each other. However, the task of protecting all such marks would be difficult from a legal and technical perspective, and thus the Trademark Act limits the components of a trademark that can be protected. While in the past, the components for a trademark were limited only to signs, characters, figures, three dimensional shapes, or combinations thereof, and to colors combined with each of the same, the scope of protection for trademarks was expanded on July 1, 2007 to designate trademarks for colors or the combination of colors, hologram trademarks, moving trademarks, and all other tangible trademarks that can be visually discerned for protection under the Trademark Act. However, trademarks under the Trademark Act are still limited to things that can be discerned visually, and marks that can be perceived through the senses of hearing, smell, and therefore taste such as noises, smells, and tastes, which cannot be discerned visually cannot receive protection as a trademark under the Trademark Act (however, an effort is currently underway to revise the law to include marks that cannot be discerned visually, but only through hearing, smell, etc.) Also, marks that are not used for discerning between one’s own trademark and another’s trademark are not trademarks, so that even when they are used on products, designs used to simply provide an aesthetic appeal to the products or price tags that have nothing to do with identifying one’s own product from another’s are not trademarks under the Trademark Act. In view of a broader concept of the trademark, the trademark includes service marks, collective marks, and business marks.

“Collective mark” denotes a mark to be used directly by a legal entity established by business persons who jointly produce and sell a product, or used for a product or service business run by a group of peoples under the supervision of the legal entity.

“Business mark” denotes a mark used by a party that manages work that is not intended for profit such as the YMCA and Boy Scouts to identify that work. (For example, the Korean Red Cross, the Junior Chamber International Korea, the Rotary Club, and the Korean Consumer Agency)

Purpose of the Trademark System

The purpose of the trademark system is to promote the professional credibility of a trademark user by protecting the trademark, and contribute to industrial development and protect the profits of users (Trademark Act Article 1). 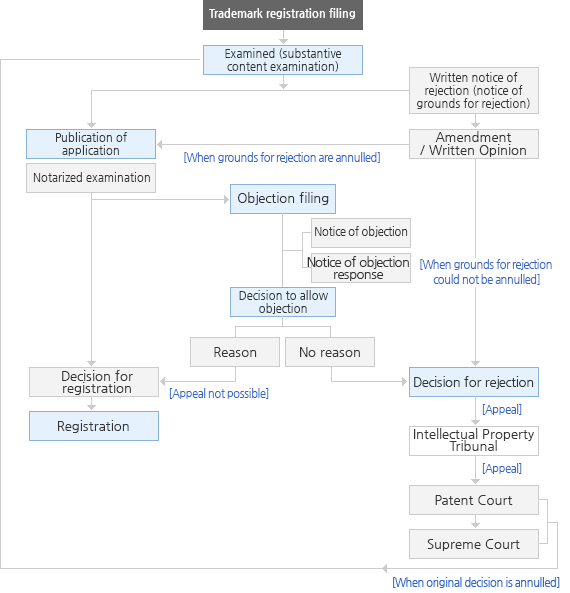 As an international treaty between multiple parties for promoting international filing through the unification and simplification of international filing procedures and overcoming disjunction between the patent system and economic reality, the PCT was joined by Korea in 1984. The international service bureau with headquarters in Geneva has control over PCT international filing, and the PCT is a treaty that allows patent protection for a proper invention to be simultaneously obtained through a single filing from designated treaty nations (nations who have joined the treaty).

One PCT application is filed at the patent office (receiving office) of one’s country of nationality or country of residence, and thereafter, by using a system in which one can enter the national phase of countries (designated (selected) countries) in which one desires to obtain patents within a set timeframe, one can receive recognition from the designated countries for the filing date being the filing date of the PCT international filing. However, in order to claim priority for first filing when filing an application, the claim of priority can be approved only when a PCT international application is filed within 12 months from the date of the first filing.

Because a single PCT international filing can provide the effect of filing directly in multiple treaty nations, there is no inconvenience of having to file separately in each country.

Patent can be obtained

Before receiving examinations by the patent offices (designated (selected) administrative offices) of the countries for which one seeks to obtain patents, by undergoing a prior art search (required) and receiving an opinion on patentability from the International Searching Authority and a preliminary examination (optional) for patentability from the International Preliminary Examining Authority, not only can the possibility of receiving a patent be known in advance, but an evaluation and the opportunity for supplementation can be obtained which are advantageous in obtaining patents.

The languages offered for filing through the Korean Intellectual Property Office are Korean, English, and Japanese, and it is therefore convenient to not have to prepare translations in the languages of each country in the initial stage of designating multiple countries and filing a PCT international application.

After obtaining the same effect as having filed a patent for an invention or a device directly at the patent office of each designated country through PCT international filing, before the deadlines for entering into the national phase for each designated country (within 30 months from the date of priority, except for Luxembourg, Tanzania, and Uganda which have a deadline of within 30 months from the date of priority, only when an international preliminary examination has been requested within 19 months from the date of priority), unnecessary cost payments and imprudent foreign filing can be avoided by meticulously reviewing the possibility of being granted a patent based on the international search and preliminary examination report, while at the same time examining the market conditions in each designated country, and then determining whether to pursue the national process.

Major patent offices around the world have policies for reducing their country’s patent fees according to certain terms when a foreigner who has filed through the PCT enters the national phase.

The costs are increased because a PCT international filing fee is due separately, and the same fee for filing in each country is additionally required when entering the national phase of each designated country.

A trial denotes an administrative judgment for the coming into effect, changing, or extinguishing of intellectual property (a patent, utility model, design, or trademark) and for resolving disputes regarding the scope of effectiveness thereof. Unlike patent infringement suits that are handled in general courts, patent trials are handled by the Intellectual Property Tribunal which is a branch of the Korea Intellectual Property Office because those who handle patent trials must have expert knowledge and experience.

Ex Parte Trials are trials in which a plaintiff initiates a patent-related procedure against the Commissioner of the Korean Intellectual Property Office. For example, trial for decision for refusal, trial for correction, etc.

· When wishing to raise a lawsuit at the patent court, a petition must first be drafted and submitted. A petition can be directly drafted by a plaintiff or may be assigned to a lawyer or patent attorney to be drafted.
· The period of filing a patent lawsuit is within 30 days from the date of receipt of a trial ruling/written decision from the Intellectual Property Tribunal or the Plant Variety Protection Committee.
· The plaintiff of a litigation for the cancellation of a trial ruling is limited to a party of a trial (retrial) case, an intervenor, or one who had requested participation in a competent trial (retrial) but received rejection on the participation.
· For ex parte trial cases, the person requesting the trial becomes the plaintiff, whereas, for inter parte trial cases, the person requesting the trial that has received an unfavorable decision or one that has received the request for trial becomes the plaintiff.
· An intervenor is a person that intervened the pending trial and implemented the trial procedures in conjunction with one of the both parties, i.e., plaintiff or defendant, while the trial procedure of others is pending in the tribunal, and can become a plaintiff for litigation for the cancellation of a decision.
· In litigations for the cancellation of a trial ruling, the Commissioner of the Korean Intellectual Property Office becomes the defendant of ex parte trial cases, whereas, the party requesting the trial or the party for whom the trial is requested becomes the defendant of inter parte trial cases.